Each of us has listened to excellent leadership development lectures and read good books on leadership with great lists of the qualities of a good leader/manager. How often do these teachings go into practice? For me, suspicion arose in the last millennium. At the time, I was an occupational health doctor at a steel plant, and the foremen participated in reputable rather long internment training on topics such as management. After the course, an experienced foreman told me about his “ahaa” experience and how he tried to implement the new management methods he learned in the course in his shift. After a while, the employees gave depressing feedback: “Don’t pretend, you’re not like that!”

After this event, I have strongly believed that leadership should also be developed together at the team level. Otherwise, it could be like the case I described above. As the importance of self-managing/team-managing increases, I have become increasingly convinced that leadership will take a big step forward if leadership is developed together with everybody in the team. Management is therefore not just a matter for the leaders. You can’t lead well unless the people you’re leading are in for it 100%. 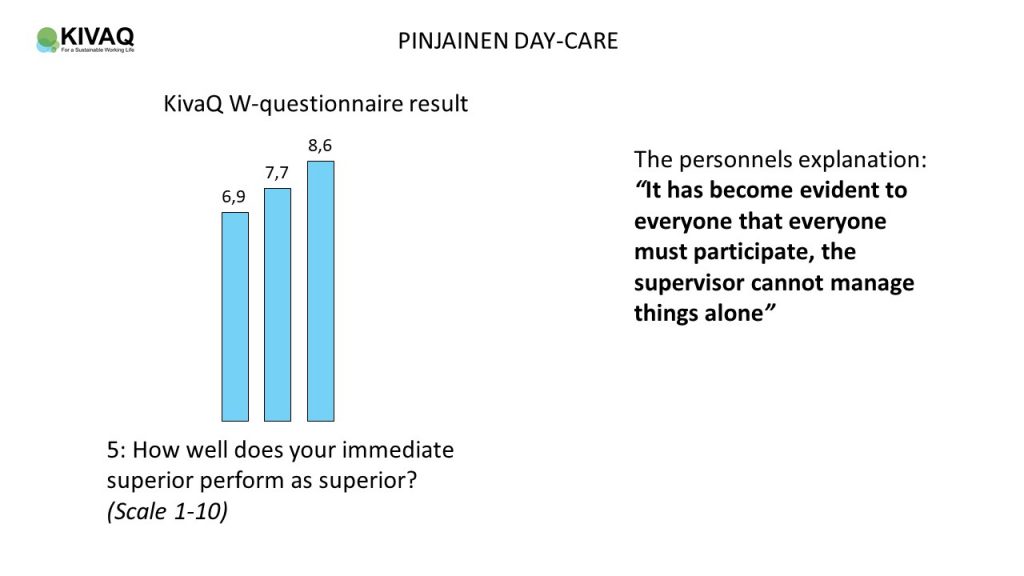 In one of the day-care centre’s workplace well-being development workshops, the level of management of the supervisor increased significantly during the follow-up. I asked the team the reason for this positive development, but the participants found no reasons. The team had remained the same and the supervisor was the same and did not act differently compared to before the follow-up.  After reflection, one participant came up with a reason that others agreed with: “It has become evident to everyone that everyone must participate, the supervisor cannot manage things alone”.

I do not underestimate the training of supervisors/managers or the importance of strategic decisions by top management of a large organization. However, I strongly believe that there has not been enough focus on the development of leadership at team level, which is the most important level in terms of work well-being, meaningfulness, influence and the result of work.

There are often very different teams in a larger organization. Perhaps the most sensible way is not to micromanage the way different teams are run by the senior management. Should the organization allow team-level management/leadership diversity? Can the team, together with their immediate supervisor, decide: “How do we want to be led?”.  In my experience, the things agreed together in the team are also implemented in practice. We know that we defend things that we have been able to influence, but we are opposed to instructions and regulations from outside.

Few are the supervisors/managers who meet all the criteria of a good leader. Do such people even exist? Would it be worth saying that management is such an important and difficult issue that it must not be left solely to the leaders?

To reach the best results in a team even leadership should be developed all together in the team.

We use cookies to ensure that we give you the best experience on our website. If you're ok with that, please confirm by clicking the button "Accept". Read more.AcceptRefuse